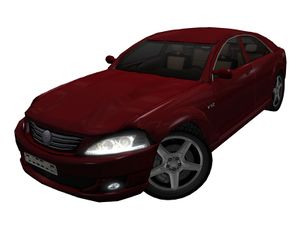 The Elegance is a vehicle created and sold by Lusch Motors. It was introduced in October 2010.

The Elegance is a not very common combination of a powerful high-end sedan and a RP vehicle. It features strobe lights so it can be used in RP scenario's too. There's a toggable taxi sign so it can be used as a taxi as well. This is frowned upon by certain people. But the creator, Owen Lusch, explains: "In Europe, most taxi's are high end German cars."