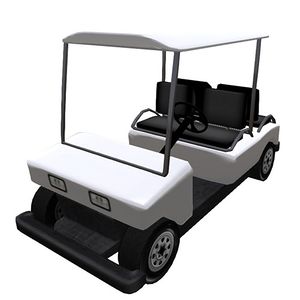 The Golf Cart is a vehicle created and sold by Lusch Motors. It was released in October 2008 and is by far the best selling Lusch Motors vehicle ever made. The Golf Cart was made as a joke by Owen Lusch, but it became a big success right after the release. Even today, multiple copies of the Golf Cart are sold daily.

The Golf Cart received multiple updates. Most noticeably is the addition of a custom color HUD and the custom textures function.

There have been numerous ripoff attempts made by other creators to lift on the success of the Golf Cart. One creator went as far as copying the description text of the Lusch Motors Golf cart and use it on his advertisement. Other creators, like Tupac Redstar, just completely copied the design and called it his own.