The NTBI Development Campus was the name given to two versions of the campus built in the NTBI region. 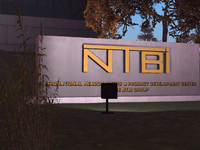 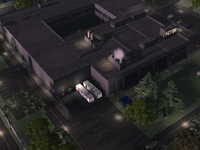 The first campus began construction in October 2012, immediately after the region was purchased. It was aimed at being a product testing area completely inaccessible to the public during testing periods, but still capable of handling occasional "open days".

As opposed to the NTBI Celaeno Complex, the Development Campus was an industrial warehouse and testing facility. Although offices were built, the bulk of the building was shared by a warehouse and a downsized auditorium for press releases. Also unlike other buildings, the first Development Campus did not have a basement, and only parts of the building featured a second floor.

To assist with the development of the SZYM Intruder, two road loops were built - the exterior loop, which ran along the outside of the perimeter wall, and the campus loop, which ran along the outside of the building. Two entrances were also built; a main entrance with a security checkpoint and traffic signals, and an unmanned rear entrance for deliveries. The small parking lot in the rear of the building also hosted a large curved incline to test the SPT tire traction simulation, but it was removed after release.

The first campus was a testbed for a variety of other products, such as the Gentek Security Camera Kit, although its primary product was the SZYM Intruder.

The campus was demolished in February 2013 for a rebuild. 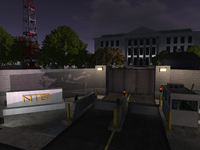 Front entrance with main building in the background.

The second campus began construction in February 2013 and featured a more urban environment, although it retained the perimeter wall and upgraded the security checkpoint. Along with the main building, which was never completed, the campus featured a dedicated building for the Roleplay Stock Exchange, a warehouse, and a small security outpost, along with some open areas for future construction.

The second campus had a different road layout; although the exterior loop remained, the interior loop was changed. There was a loop road, but it went down into private underground parking behind the main building, and other parts of it were one-way. However, the addition of some extra roads meant a variety of turns could be tested.

Unfortunately, the second campus did not see much use, as no new vehicles were being developed at the time and the building interiors were never completed.

The second campus was demolished in April 2013 and used to start construction on parts of Harrison.