The NTBI Celaeno Complex was the NTBI headquarters built in the Celaeno region during 2012. 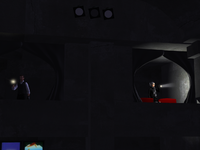 The original building was built in July 2009 and named the Celaeno Compound. It replaced a separate building on the Celaeno parcel.

Not much information is available from the original construction; however, in January 2013, a saved copy was found and rezzed. Although the interior lighting was no longer functional, it was explored once again by some NTBI members.

Some notable differences were the extensive use of sculpted chairs, older sliding door designs once common among NTBI buildings, and more open spaces than the later building. Although it was the same size, it was internally different from its later counterpart and featured some long-forgotten rooms. 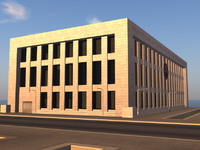 NTBI Celaeno Complex prior to its expansion into the adjacent lot.

In 2012, the NTBI Headquarters returned to Celaeno from Lionheart Mufasa and built on the same site as the original building. Although slightly modified thanks to the introduction of 64m prim limits, the exterior structure was essentially the same.

This structure was built and mostly furnished in approximately 2 weeks. It featured offices for all NTBI affiliates & staff as well as several meeting rooms, lounges, and other amenities. Originally, it was planned to be 2 floors plus an attic for secure emergency access to upper rooms, as well as 2 basement floors. Later on, half of the adjacent lot was purchased and used as a parking lot for additional prims. 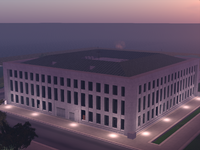 In mid 2012, the last quarter of the block was vacated and purchased. During the next few weeks, the parking lot was demolished and the building expanded into the new area, doubling its size. This necessitated a complete redesign of most of the complex, although it vastly expanded the available space. The larger building featured many more amenities:

Although originally planned, a hockey rink, indoor pool, and recycling center were cancelled to make way for the auditorium.

The Celaeno Complex was also the test bed for the Gentek IntelliLight system.

In September 2012, the Celaeno Complex was demolished to make way for Szym Tower.