DriverKid Baxter (joined December 13, 2006) is an employee of NTBI, providing animations, textures, consulting, testing and feedback to various individuals and companies within NTBI. 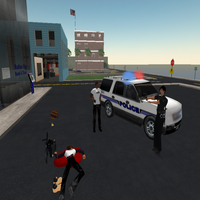 DriverKid Baxter, seen here after being shot by Josh Lowe in Radian City.

Having participated in other 'virtual world games' such as There and ActiveWorlds, DriverKid decided to join Second Life on December 13, 2006. Having read about Second Life numerous times in internet articles, and magazines such as WIRED, Second Life seemed like a natural progression from the relatively primitive competitors on the market. After getting on his feet in Second Life, he searched for 'city' in Second Life Search, quickly finding Radian City. It was here where modern RP was born, and where DK started honing his roleplay ability. As various RP cities opened and closed, he was usually in most, if not all, of them. As the years passed, he met influential people like Nelson Jenkins who at the time was still on his original Peter Nelson account, Will Szymborska, and ac14 Hutson. Will and DK hit it off and became great friends in a short period of time. 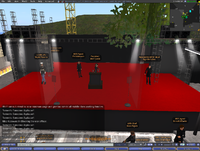 In 2009, Will Szymborska and ac14 Hutson became heavily involved in Silverdale City - a popular roleplay city. Will started the Silverdale City Secret Service, tasked with protecting the city's mayor and builder, Kenn Darkstone. In a sense, the SCSS foreshadowed the NTBI Security Service, or NTBISS as it was often called. After the eventual closure of Silverdale, a similar security force was run in the first iteration of the City of Mascouten, where DK was already an avid roleplayer, having played there as a police officer and department of transportation employee. Wolf Lumin, roleplaying as the US President, was protected by a Secret Service security team who was trained very similarly to how the later NTBISS would be. Eventually as the NTBI conglomerate became better known, DK was brought into the NTBISS. They could regularly be seen providing security to NTBI buildings, and protecting Will and ac14 in large convoys of black vehicles when they traveled to various roleplay cities around the grid. In 2010, Will Szymborska created the next generation of Mascouten, unofficially referred to as Mascouten II. Here, DK roleplayed as a few different characters, including a police sergeant, NTBISS agent, pizza delivery person, and as an Italian mobster. Mascouten eventually fell, as did many other notable roleplay sims such as Santa Carla Isola and Omega City in one of its many iterations.

In 2011, the NTBI group started on another roleplay sim, the City of Concord. Will Szymborska took point on building, with Nelson assisting. While DK was a moderator, he RP'd as a both a Concord Police Officer, New Jersey State Police Trooper, NTBISS Agent, DOT employee, criminal, and many other various roles in the city. It truly was the golden era for roleplay, as Concord regularly attracted just about anyone and everyone interested in free-form para-RP. While Concord may have appeared idyllic from both outside and from inside, all was not perfect. The management team started to crack and fracture, with the eventual exodus of the original team. DK was no exception, having left voluntarily as things started to sour in 2012. From here on, he jumped around RP sims as they appeared and died, and started to work with Qavamator to make animations. In mid-2012, Empty Neutron invited DK to become a partner in his Kyoto business, where the pair created the Traffic Control HUD, and a handful of other products. In late 2012, he was commissioned by Will Szymborska to make animations for the then-unreleased 2012 SZYM Intruder. Being fairly new to animating, this was no simple task for DK, who eventually managed to create a decent set of animations for the car. Shortly after the Intruder's debut, he made his police vehicle and uniform texturing debut in the City of Canton, causing the shortly lived roleplay city to be the first in the grid to have mesh police uniforms and mesh police cruisers. After the closure of Canton, he made his sim building debut in the Town of Bridgeport, run by Jaxith Zapatero. In 2013, the City of Harrison began to take shape, and NTBI continued to release products. Owen Lusch commissioned DK to create animations for the Lusch Motors Himalaya, a job that was much easier with the experience from the Intruder under his belt. As Harrison progressed, DK provided support as Will built the sim, helping him to incorporate many ideas from his years of RP, and providing inspiration for some notable buildings, such as the police precinct. 2013 also marked the start of the Deekay brand, a company providing prefab buildings.

After a quiet year of roleplaying, texturing police vehicles and uniforms, and generally just hanging out in SL, autumn 2014 marked the opening of the City of Port Brixton. Port Brixton was, and still is, considered by DK and many of his friends to be one of the best roleplay regions they had built and played in. Its life was brought to an early end as the City of Harrison was finally brought to completion and opened. The Port Brixton team moved into the city, with DK taking point as a criminal running King Car Service - a thinly veiled theft and drug trafficking ring. King Car Service lasted until the end of Harrison's first iteration where it was shelved for future RP. He continued to participate in modern RP, participating in many RP sims, and again creating police content for numerous sim owners. Likewise, he also built many RP sims, most with Trevelyan Irelund and Jaxith Zapatero, and a few other friends. Early 2016 marked the creation of Uniform Violation, a company providing emergency services clothing after. 2016 brought back the City of Harrison once more, with DK this time taking point as the city's Chief of Police. Foregoing normal convention, DK himself roleplayed as a detective and then a police officer, while running the chief of police on an alt account. This meant he could run the department and realistically participate in roleplays where the chief of a major police force wouldn't be involved. As the city's population dwindled, Harrison was finally closed once again, and DK yet again started hopping between various RP sims.

Today, DK is still active in the roleplay scene and plans to be indefinitely, although not as much as previous years. Still visiting various sims, he can mostly be found in Briggs County or just hanging out on various Mainland locales. 2017 also marked the re-branding of both Deekay and Uniform Violation to a more consistent theme. Likewise, Deekay and Uniform Violation will continue to release products.