The SZYM Entourage is a full size SUV sold by SZYM Motors. It has been a one of SZYM's best selling vehicles and is the longest running model from the manufacturer (with the exception of the SZYM Metro which is no longer for sale).

The Entourage was originally badged the SGM 'Enforcer', sold by WillMart on Teen Grid. It began production in March of 2007. It came equipped with basic wig-wags, two front mounted alternating red/blue lamps and 2 functioning gears, Forward and Reverse. The Enforcer had one speed, seating for 3 people, working headlights and a 'burnout' option. The 3GEN script set was developed by ac14 Hutson starting in late 2006 for use on all new WillMart vehicles. The same features were found standard on all WillMart sedans, trucks and SUVs. 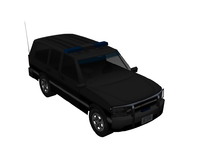 The Enforcer was the first vehicle to be rebadged as a SZYM in preparation for Will Szymborska's transfer to Main Grid in June 2007. The names 'WillMart' and 'SGM/ Second Generation Motors' were both dropped in favor of the shorter name 'SZYM Motors'. The new SZYM model was considered the 'Tideway' but was changed before production started in July of 2007 on MG. Instead, the name 'Entourage' was adopted and a shorter version name would be added to accommodate future light kits (IE: SZYM (Brand name), Entourage (Model name), Ag (Agent, the version name for lightbar style).

The Entourage received a minor cosmetic upgrade, a optional open-able (rezzing) side door, working rear roll up windows and a rear opening tail-gate with rear facing shooting animation. It also had a basic lightbar and front bumper mounted strobes. It also was the first vehicle to include multiple gear sounds.

Besides the addition of two extra gears, it had only cosmetic differences from the Enforcer. It featured dash mounted alternating strobe lamps and a basic siren set. These features were all GUI controllable and could operate with simple chat commands from the vehicle owner as well.

In mid 2008, The Entourage received a minor cosmetic upgrade, a optional open-able (rezzing) side door, working rear roll up windows and a rear opening tail-gate with rear facing shooting animation. It also had a basic lightbar and front bumper mounted strobes. It also was the first vehicle to include multiple gear sounds.

With the introduction of sculpties, redesign, research and development was underway to produce a new model for the upcoming 2009 model year.

The first sculpted model of the Entourage was built in June 2008 for the 2009 model year. It included the new "BARRON" NTBI Engine (pre-SVT, post-Teen Grid) and had 5 gears. It also featured custom light colors, was the first vehicle to include multiple themes sold by SZYM, a working traffic director/ display, custom wheel/rim choices, toggleable details and working brakelights.

For this model year, attachment light kits were included to complete with then competitor, Gentek Technologies who was releasing it's own attachment light kits for use on the Entourage. These kits featured details such as a laptop, spotlights, antennas etc. to improve appearance of the model and enabled users to set their own light colors.

It was also the first vehicle from SZYM Motors to feature a HUD to control lights, sirens and LED display patterns. 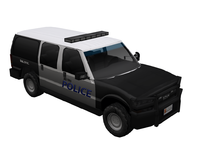 In 2010, it received a major upgrade to include the new NTBI SVT Engine script set and an extended wheel base. Theme's were also redone and included new emergency services graphics, new lightbars and new sculpted LEDs on the mirrors, grill and back bumper. It also received new themes,a raised roofline, a new sleek grill design and new wheel rims. Multiple structural parts were also replaced.

With improvements in sculpting & scripting techniques, a redesign would need to be necessary to include custom side graphics and fit new technologies being made available through partner companies Astaro and Lusch. Furthermore, the 2010 model still featured original Entourage styling and was beginning to show age compared to other sculpted products in the Emergency Vehicle Market. Work was halted and eventually abandoned to include new side doors and other Side-Decal compatible parts in favor of a completely new design for the 2011 model year.

However, the 2010 model was used in the HAUL-LT and HAUL-HD product line for commercial vehicles not requiring custom side decals such as the 2010 and 2011 versions of the SZYM HAUL-LT Ambulance and has also been used in NTBISS and NTBI company service vehicles since from 2010 to present.

The 2011 model year included the much needed improvements to the non-alpha door design to accommodate the new custom Side Decal feature (and later the Livery Decal option). Light kit's developed for the 2010 Entourage were shared in the 2011 model year, however sculpted lights replaced prims which were previously used to display head and tail lamps.

With the introduction of this 1 prim sculpt, the Entourage was the first SZYM vehicle to include self contained wig wag and hazard light operation. A new interior, steering wheel and dashboard were fitted. It also included toggleable radio sounds and a new set of themes to compliment the new body style. 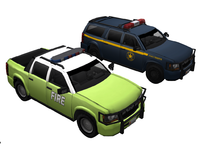 In 2012 a major redesign of almost all exterior parts allowed for see-through back windows as well as improved lights and windows prims. It also included the GENTEK EVHUD as its default HUD controller. It also features included 4 ways and blinkers aswell as wig wag and head/ tail light animations. Included were details toggleable on the 2012 Intruder which include licence plate reading cameras, a toggleable interior divider, toggleable laptop computer and improved interior door pannels. NTBI In-Car Radar and NTBI Ticket Printing have also been included to match specs of the current Intruder counterpart. The latest 2012 model comes with the Tahari, a modified pickup style version of the Entourage.

It is expected that the Entourage will use this current sculpted body type thru Spring of 2013 until a replacement is built to take advantage of mesh modeling. 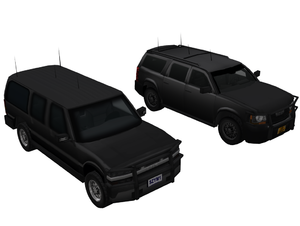 Each model year has had it's NTBI-AR counterpart. For NTBI staff and NTBI Security Service employees, a customized version of the Entourage has been built. It features 'vehicle armoring', a higher top speed, tinted windows and NTBISS Radio communication protocols. Its appearance defers slightly depending on its specific use. Some versions include retractable driver-side specific steps, laptops/ computers, radio/ telephone communication equipment, situation-awareness-specific radar (SAS-R), back window curtains, skid plates and other interior features. These models are not for sale and only sold to very specific clients after their model year is decommissioned for use in Executive Protection details.