Mascouten is considered to be one of the founding fathers of Second Life roleplay, particularly in the first responder field. However, it was far from the first roleplay city, which most assume was Radian City in 2006.

While called "Mascouten", most roleplayers refer to it as "Mascouten I" or "Old Mascouten" due to the modern spinoff, also called Mascouten. 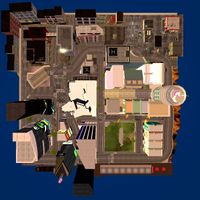 A rare snapshot of Wolf Lumin visiting the sim. He was rarely in the sim, almost always busy with real life. To the left is Kevin Susenko, and near the bottom is Nelson Jenkins.

Mascouten was first built by Wolf Lumin, Alexandre Rehnquist, and Midtown Bienenstich in 2007, where he had his main store for LMD. The city was based around Times Square, including iconic landmarks such as 1500 Broadway (hosting the world-famous ABC Good Morning America ticker) and the NASDAQ sign on the Condé Nast Building. Of course, these were repurposed for LMD advertising and Second Life related satire. Wolf opened the city up to commercial tenants soon after, where Gentek Technologies kept a store directly next to LMD. It later proved unpopular and was closed. In late 2008, Mascouten was repurposed for urban roleplay, which practically defined roleplay as it is today. Wolf Lumin remained as the estate owner until he could no longer afford the tier. The region was put up for sale and purchased by Decaf Coffey, who kept it running for several months with Wolf's assistance. During this time, Mascouten slowly started to decline, until Decaf eventually closed down the sim in late 2009 and reopened it as a "wild west" style roleplay sim.

The City of Mascouten was inspired in great part by New York City, with some San Francisco and Miami flair as well. The city's layout remained fundamentally the same throughout its life, but various changes and additions were made over time.

After the city's Sale and transfer of ownership, Wolf Lumin continued to be the chief builder. The most notable change was the addition of the Old Town area in the north.

In the end, Mascouten featured a fully functional highway, underground tunnel, topography, affluent residential space, a spectacular downtown, and older ghetto area, and full city services. The harbor was built upon by Chaves Shu with great approval by Wolf Lumin, Downtown housed many businesses, the longest standing of which included Lumin Enterprises (LMD), Gentek, and Zero Tolerance. Along the northern highway loop was Mascouten General Hospital and the Mascouten Fire Department. East Mascouten boasted a Bank, Coffee Shop, Townhomes, Park, and Mall. Old Town was in the north, housing commercial endeavours such as restaurants and bars, Silverman Manufacturing, and the DMV.

Mascouten featured the Mascouten Police Department, a popular roleplay department which staffed 30+ active members. The department was funded by Wolf Lumin directly, who supplied custom-themed vehicles and uniforms. Nelson ran the department's training program - the predecessor to the LEOPARD Training Course - and managed dispatch, gathering ideas for BluComm and some other short-lived dispatching tools.

The Mascouten Fire Department was the city's fire department, also sporting 20+ full-time members. However, it changed hands often, as with most roleplay fire departments, which crippled its effectiveness. Some NTBI members started the Mascouten Department of Transportation, which ran occasional road work around the city. The department only existed for a few weeks; it was closed due to general inactivity.

There was a Department of Motor Vehicles for several days, but the project was abandoned.

Nelson was the first of the current NTBI staff to set foot in Mascouten (excluding Wolf Lumin) after it was christened as a roleplay sim. He quickly got a storefront at the equivalent of One Times Square and set up advertising signage.

Later, ac14 purchased the storefront across the street, restarting the since-quieted Bliss rivalry with a Tredpro/Astaro store. An advertising war ensued, mostly focused on custom lightbar colors for vehicle attachments. Eventually, the store was closed, and Red Wind purchased the building. Gentek remained until the region was closed.

While Tredpro/Astaro had a presence in Mascouten, NTBI brought Wolf Lumin and LMD into the conglomerate. However, at that point LMD was generally no longer active.