Nelson Jenkins is the owner of Gentek and NBS. He is a co-chairman of the NTBI Group, though not a founder.

Nelson in the Grid12 Design offices.

Nelson in the Gentek main store in Fox Valley in May 2009, in front of an Escort Unmarked lighting attachment shown on an LMD Enforcer. 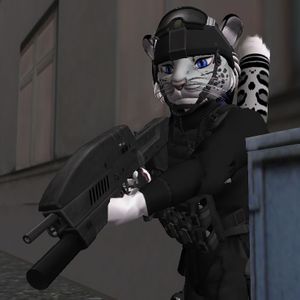 Nelson's original account was Peter Nelson. Nelson (as Peter) spent most of his early years in Second Life in public sandboxes, occasionally founding various small virtual police departments tasked with combating griefers. Most of their equipment was poorly modified freebie weapons and vehicles, although Nelson created the first attachment police lightbar in August 2006 under the Effective Emergency Equipment brand, which was renamed to Second Signal Industries a few months later. He was notably the founder of the original Second Life Police Department group in 2006, which was disbanded several months later when Linden Lab renamed all of the SLPD groups (and groups of SLPD's "competitors") to remove all references to "SL" and "Second Life". Nelson worked on various small projects during the first few years, such as Twilight Theaters, a movie theater that played nightly movies using land media DVDs with what were likely pirated videos.

During this time, Nelson kept a presence in most early roleplay cities, starting with Radian City in 2006. After being banned from Radian City, Nelson squatted on an abandoned parcel and built Dracose City, a small competing city, which soon failed. Nelson instead chose to focus on the SSI brand, and produced a small range of attachment lightbars and some other equipment for sale in his store in Deneb.

In August 2007, Nelson transitioned to his current account, Nelson Jenkins, and relaunched his brand under the name Integrated Alert Technologies. In December 2007, he renamed it to Gentek Technologies and began work on a much broader series of products. This included the T46P Taser, a virtual version of the X26 Taser. Nelson narrowly avoided inclusion in the lawsuit by TASER International against Second Life by launching the product only a few months before the lawsuit was filed. As The Newman Group collapsed due to Linden Lab's forced shuttering of their store, the T46P Taser gained popularity and brought Nelson into the world of urban roleplay content creators.

Throughout this time, Nelson also experimented with Grid12 Design, a brand planned to release the gMac, which was a virtual computer intended to capitalize on the ongoing iMac clone craze in Second Life by using icon-based technology similar to the InfoNet R5. This project bounced to Gentek, then to Ionic Computing, a short-lived brand that sold it in Mascouten I before shutting down a few weeks later. The spirit of the project - albeit none of the code nor design philosophy - was eventually transformed into the Mark 1 project by NBS.

Gentek, meanwhile, continued to expand. More importantly, however, Nelson involved himself in more roleplay cities, including Omega City, the City of Clearwater, the City of Princeton, the City of Oceanside, Santa Carla Isola, Hathaway, Montreux, Richmond and Mascouten I. There, he set up satellite stores and advertised his products to city builders. He also broadened the scope of Gentek's product lines to the original smartPhone, the Road Sign Kit, the IntelliDoor, and the STX-ALRM Fire Alarm, at the requests of customers and city managers.

When Gentek moved to the Bliss region in 2008, Nelson built a store across the street from SZYM Tower and an Astaro store at the request of Hal Berkmans, then an NTBI staff member. Hal then requested that Nelson include a teleporter to Hal's store further away in the same region, which had affiliate vendors for NTBI products. This sparked an intense rivalry and caused ac14 Hutson to start the Tredpro brand, which created attachment lightbar kits included for free in SZYM Motors vehicles. Although they tried to resolve their differences, all three companies created so much drama over the next few months that the estate owner shut down the region.

All three companies relocated to Mascouten I, where the rivalry continued through attack ads on billboards and fictitious news tickers in Mascouten's Times Square. During this time, the NTBI Group was officially founded between Will Szymborska of SZYM Motors, ac14 Hutson of Astaro and Tredpro, Owen Lusch of Lusch Motors, and Wolf Lumin of LMD, who owned the city. The group was founded in part as a tactic to pressure Nelson out of the market. However, when Mascouten I closed, Will Szymborska created Mascouten II and tolerated Nelson as he worked in the Mascouten Police Department. Although Nelson was ultimately and unceremoniously banned shortly before its closure, the three were on better terms when they worked together to build the largest city yet, the City of Concord, in February 2011.

During the construction of Concord, Will Szymborska and ac14 Hutson proposed that Nelson should incorporate his EVHUD technology for free into SZYM Motors and Astaro vehicles, and in exchange, they would pay Nelson to build and script new lightbars, and Nelson would earn income from stronger Siren Store sales in the EVHUD. Nelson accepted and became an NTBI affiliate. Although Concord survived for a very long time, Nelson was unhappy with the forced addition of several other city managers and left before it was overtaken by a rogue manager and NTBI was ousted. By then, however, Nelson was developing equipment for NTBI vehicles full-time and started to contribute to other NTBI projects. Conversely, Nelson got NTBI assistance for then-new mesh models and texturing. Ultimately, Nelson began working as a web developer for the NTBI Group.

By 2012, NTBI was experiencing its "Golden Age", and Nelson began working on complete car scripts for the SZYM Intruder - the SPT scripts - as well as various other revolutionary products, such as Web Config, EVHUD 3, Global Fuel System, the Condor Elevator, and the first development of the Mark 1 computer. For the most part, Nelson's work was confined to the NTBI Group. The Gentek brand slowed down and transitioned into primarily building components, as Nelson started the Sei Computing brand, which ultimately became NBS. Because of his pervasive involvement in the NTBI Group, his contributions since are generally documented on the NTBI Group page.

Nelson is considered one of the elites of the NTBI Group and urban roleplay due to his pervasive contributions to the community. As of 2018, his net worth is approximately L$31.4 million.

Nelson keeps to himself and rarely socializes beyond his NTBI cohorts. When he is online, he is rarely ever seen outside NTBI properties. Little is known about his personal history.