The NTBI Hyperion Office is a long-standing high-rise building in the Hyperion region.

Originally, the region was on the now-defunct Teen Grid, where it hosted offices and stores of Will Szymborska prior to his transfer to the Main Grid. When the grids were merged, the land was reacquired for use as a satellite office. 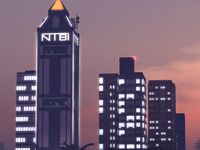 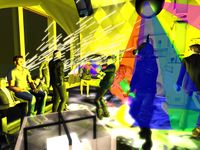 A party is happening!

The current building is a 4-floor complex - Lobby, Offices, Lounge, and Servers - whose primary purpose is to host main servers for all NTBI affiliates, although backup servers are also located in undisclosed locations.

The building is rarely occupied; as it is a public location, no product development or testing is performed there, and there is not enough space to do much else. In-person server maintenance is usually only performed once every few weeks and only lasts a minute or two.

However, as Hyperion is currently the only location on a full sim where NTBI has an office, it has sometimes hosted extravagant parties of 20+ people, which would not be possible in the homestead locations (Prototype Gardens Mall and the NTBI Development Campus).

The "Hyperion Time Crisis" occurred during July 2013; Hyperion experienced severe synchronization issues which caused its clock to go several hours behind. Additionally, payments and product deliveries could not be performed, and would fail even if done manually through one's inventory. This caused a brief outage (as our systems received confirmation messages from the servers, but the actual deliveries would silently fail) but was resolved the next day. Incidentally, when the region was fixed, all failed payments and deliveries suddenly went through, causing some people to receive several copies of EVHUDs and update deliveries.