SZYM Tower has been the name given to several large high-rise buildings built by Will Szymborska. Although they are numbered chronologically, they are all formally known as "SZYM Tower" without the numerical designation. The name is a play on the game SimTower, which was one of Will's favorite video games during childhood.

SZYM Towers I, II, and III

Little is known of these towers. They were constructed on the Teen Grid.

This tower was located in the Bliss region. It was demolished when Bliss shut down, in part due to ongoing drama between Will Szymborska and Nelson Jenkins before he joined NTBI. 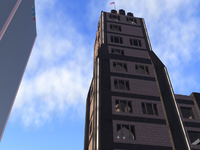 SZYM Tower V in Lionheart next to the Union Micro building.

This tower was located in Lionheart. It hosted the NTBI 2010 Christmas Party, where Nelson Jenkins was formally introduced as an NTBI affiliate. The tower was infamous for its easily broken elevators. 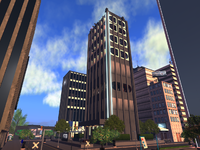 SZYM Tower VI in Lionheart with the Gentek Interregional Tower in the background.

SZYM Tower VI was a total remodel of SZYM Tower V in the same location in Lionheart.

The tower remained in the same location and was inhabited on a regular basis.

Soon after, the Gentek Interregional Tower was built across the street. After a few weeks, GIT was moved to a different location across a different street and a skybridge was erected between them.

The tower held mostly offices, with some various stores interspersed throughout the floors. 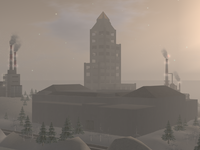 SZYM Tower VII in the distance during a smoggy morning.

This tower was a short-lived endeavor in the Prototype region.

The tower was never completed, as it was deemed too prim-heavy for the region. Shortly after, the first Prototype Mall was built.

The design was reminiscent of previous SZYM Tower designs. 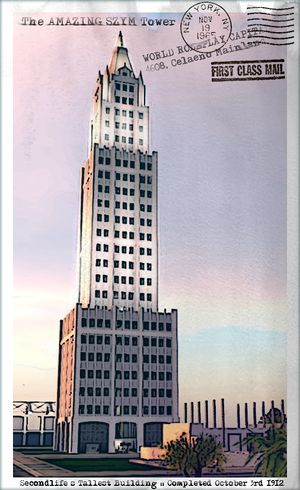 This tower was built in Celaeno after the demolition of the NTBI Celaeno Complex in September 2012. The building structure was completed and floorplans were developed, but only around 1/4th of the building was ever furnished before its demolition in anticipation of the move to the private NTBI region.

The tower was designed to accommodate the amenities provided by the Celaeno Complex in a more spacious vertical arrangement. As the Celaeno Complex featured only 5 floors (including basements) the tower provided a generous increase by way of 21 accessible floors (25 total) and 3 basements. Floors B1, B2, and 1-8 (1 and 2 being the lobby) were deemed public with plans to lease out upper floors to other companies, while floors 9-24 and B3 (excluding the lower auditorium) were private and only accessible to NTBI affiliates and staff.

Two public elevators served the public floors, while an express elevator accessed floors L, 9, B1, and B3. A separate bank of elevators beyond an NTBISS checkpoint served floors 9-24. A car elevator was also accessible from the exterior of the building on floor L, as well as floors B1 (private parking) and B3 (vault).

Below is information obtained from the final revision of the building's directory, on October 1, 2012:

In November 2012, the building was demolished and the Celaeno land was abandoned. Construction began on the NTBI Development Campus in the NTBI region soon after. 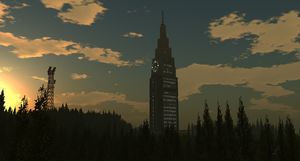 SZYM Tower IX was built in Northbridge after the demolition of one of the Northbridge complexes in July 2018, then later moved to the NTBI region. The design is based off of the NTT Docomo Yoyogi Building. The tower stands 218 meters (715 feet) above ground level at the tip of its spire, and an additional 23 meters (75 feet) below ground level. On the southern exterior wall of floors 18 through SL/21, a large lit clock face shows the time in the Eastern US timezone, home to Will Szymborska and Nelson Jenkins. At night, the top three segments of the tower are lit, much like the lighting at the top of the Empire State Building, although all in white. The exterior lighting is the only lighting to operate on estate time; all other time-based lighting and operations in the tower run on Eastern US time.

The tower itself is split into four general zones - the main tower (floors L through SL/21), the Tower Mall (most of floor B1, as well as a small portion of floors B2 through B4, including the Party Hall), the basement (the rest of floors B1 through B4), and the executive suites (floors 22 through 24, as well as the roof utility area). Certain rooms in the tower are connected using hidden passageways. Additionally, the tower site is the home of the Peter Nelson Convention Center (PNCC), a very large hall attached to the lobby of the tower designed for public events. The tower sees frequent use among NTBI staff and friends.

SZYM Tower IX was the first to be built partially in mesh. The tower features the Maestro 512 Background Music System throughout the building in four separate zones - the PNCC (which plays a selection of city pop, particularly Casiopea), the lobby/skylobby (which plays light jazz), the Party Hall (never used), and Club Shinjuku (which plays piano music). Gentek lighting is installed throughout the building, and lighting in common areas automatically switches into eco mode at 11:45 PM nightly. Additionally, several areas - Ramen Man, KanSalon, the mailroom, the skylobby TahdaMart, and Club Shinjuku - open and close at different times daily using lights and security grate doors. On weekends, some opening times are shortened. Finally, beta NBS Synchron synchronized clocks are installed throughout the building, as are Gentek Security Camera Kit cameras, Gentek IntelliDoor doors, and NBS NorPhone public and private phones. Nelson Jenkins also beta-tested the Gentek Delta Elevator using four elevator cars - two assigned to the main bank, one for the Tower Mall basement levels, and one for the NTBI executive suites above the skylobby. He also designed a proprietary room numbering placard system and installed an early beta of BTN to broadcast to a handful of televisions throughout the building.

One of the more popular features of SZYM Tower IX was the NTBI Resident bot, which sat at the reception desk in the lobby and walked to the bathrooms and TahdaMart on floor B1 every few hours. The bot ran well for several months, but at the start of December, he trapped himself in a bathroom stall and could not escape for several days. For this reason, he was canonically demoted to mall security at the Prototype Gardens Mall.

The tower layout is as follows:

During construction, several planned rooms and features were removed, including a BTN TV studio, a much larger secure area for access to the vault, and a secret easter egg room.

During its original existence in 2018, Northbridge was also the home to a Gentek Telecom microwave antenna tower on a hill on the other side of the region, as well as a filler factory, a scenic overlook, and the Hutson River, with a bridge crossing to Prototype. Passaic County Route 610 also ran through the region, as did the Northbridge Rail Line, which ran a freight train through every three hours from Prototype in the west through Glenbrook (Augest Isles) in the east. Those in Northbridge could also hear the Tredpro factory steam whistle, which blew twice at 9 AM, 12 PM, and 5 PM on weekdays. All of these features were scripted by Nelson Jenkins.

On December 15, 2018, SZYM Tower IX, along with the rest of Northbridge, was demolished to make space for planned new construction that never significantly materialized. The NTBI bot was repurposed as a mall security officer in Prototype.

On March 8, 2019, SZYM Tower IX was re-rezzed with very minor modifications. The rest of the region has been left flat and empty, except for filler trees, to maximize prim usage in the tower. Passaic County Route 610 was restored and the Northbridge Rail Line was reactivated. The NTBI bot, however, remained a mall security officer.

On June 1, 2019, the basement levels were redesigned to accommodate new escalators. These were the first installed escalators in Second Life to be fully animated and fully functional without the use of poseballs, courtesy of Animats. This redesign moved Ramen Man from floor B3 to B1, moved the Party Hall into the area previously used by the Tower Mall's floor B3 (including Ramen Man), and added a theater. A third empty store space was also added in the Tower Mall on floor B1, and the empty store space on floor B2 was eliminated to accommodate the upper area of the Party Hall. Later, on June 20, 2019, Nelson Jenkins replaced the escalator scripts to add minor details and synchronize with the nightly eco mode lighting.

On November 26, 2019, the tower was moved to the NTBI region. An underground walkway was added to allow access to the Prototype Gardens Shopping Centre and another was added to the showroom floor of the new Peter Nelson Convention Center, which took one of the empty store spaces. An extra set of doors was added on the side facing the entrance to the Prototype Gardens Shopping Centre. The tower was also rotated to face north instead of south. The underground parking area was expanded to include more parking and two loading docks. A theater was finally constructed on floor B3. Finally, a set of bots were created to staff some of the facilities in and around the tower, and the NTBI bot was reinstated as security in the Tower.