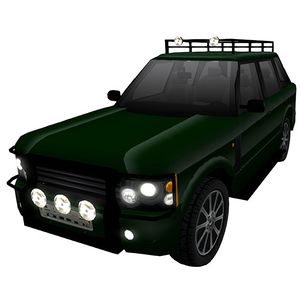 The Chelsea is a vehicle created and sold by Lusch Motors. It was introduced in July 2011. The Chelsea replaced the outdated Lusch Motors Range Roamer Sport.

The Chelsea was made with details in mind. Most items on the car are modeled, which gives it a rich looking interior. It also featured a hatch that could be opened in two ways (like the RL car). The textures were made by hand by Owen Lusch, and didn't rely on texture baking as much as previous cars. It also has a toggable roof rack and front bar, to switch between an offroader or SUV look.

Owners of the Lusch Motors Range Roamer Sport received the brand new Chelsea as a free update. Owen Lusch expected that this would crush the sale of the new Chelsea, but that didn't happen. It took a while before sales picked up for the Chelsea, but isn't now being sold almost daily.

A modified version of the Chelsea participated in the CGR '11 and was driven by JZ Cruz. Because of the size of the Chelsea, Cruz had a hard time going through narrow sections of the rally and finished 6th. He was very enthusiastic about the car.