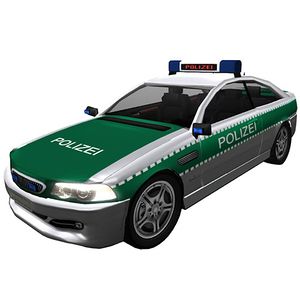 The Coupe is a vehicle created and sold by Lusch Motors. It was introduced in October 2009. It's called the Coupe because it's a 2/3 door (considering where you're from) version. The plan was to make a sedan and a station wagon too, but that never happened.

The Coupe was the second full fledged RP vehicle created by Lusch Motors. It featured numerous themes, colors, wheel styles, siren sounds and it had a light bar with a working text area. The vehicle was aimed at the European (specifically the German and Austrian) RP market, but tried to appeal to the North American market as well with different themes.

The Coupe is among the best selling Lusch Motors cars and the highest grossing vehicle for Lusch Motors. Despite being introduced in 2009, the Coupe is still sold almost daily.

The Coupe is considered a Lusch Motors classic because it uses pre-SVT scripting.