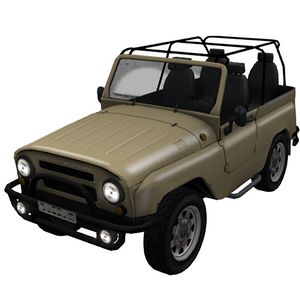 The Forest is a vehicle created and sold by Lusch Motors. It was released at the end of January 2011 and it's based off a Russian offroad vehicle. The Forest became an unexpected commercial success. The vehicle was promoted as being a 'versatile vehicle': it can be used as an offroader, beach cruiser (because of the bright colors included), military vehicle (because of the many camouflage themes included) and a RP vehicle because of the included light bar and siren system.

Short after the release, Lusch Motors updated the Forest with a hardtop roof (before this update, the vehicle only had a rollcage)

The Forest had some features that no other Lusch Motors car had before: - Working blinkers - Toggable roof or roll cage